We cannot bypass an open, truthful national discussion and have any hope of stabilizing our climate.  It is time for citizens  to grasp that our carbon addiction is a clear and present threat to humanity. With little accurate media coverage or mention by our leaders, the climate crisis is literally out of sight and out of mind for Americans. Many people are confused about the facts, but if they understood the grave risk we face, they would not be complacent.

ATL proposes a national climate education initiative, with personal teaching, dialogue, and group facilitation. The curriculum must be riveting, inspiring, and catalyzing to action. The public must understand how quickly and effectively we must respond to avert climate chaos. 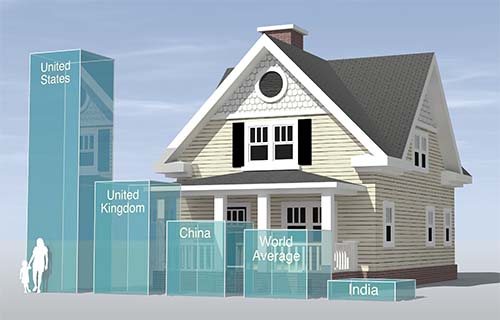 The Yale Project for Climate Change Communications researched Americans' understanding of the subject. The 2010 study, "Americans' Knowledge of Climate Change"[2]  states that although a solid majority (63 percent at the time) grasped that global warming is happening, many did not know why. The study found that "only 8 percent would have the knowledge equivalent to an A or B, 40 percent would receive a C or D, and 52 percent would get an F." Oddly, Americans are aware of their own lack of information. Only 10 percent said they are "very well informed." Sixty-eight percent would welcome a national program to teach Americans about the issue.

It is through our web of associations and relationships that we best develop understanding and emotional response—by arriving at a social interpretation of the data. Sociologist Robert Brulle with Drexel University says that engaging people face-to-face is "the only way to achieve real, lasting change [for the climate]."[3]  We are relational creatures, and we get involved when people that we know and respect get involved.

The central aim of ATL's educational initiative is to build a critical mass of Americans inspired to demand a carbon-fee-and-dividend plan, with sufficient carbon pricing to keep us under the 2°C heat limit. Towards that goal, participants get the specifics about climate science, realize the urgent need for quick action, and learn how we can work together in building an effective social movement to bring about policy change.

ATL provides a sample curriculum—a Climate Change Primer—as an example of how climate science can be readily understood in lay terms.