A ravenous, yet decrepit cyborg – part machine, part zombie – lurches onward as it is programmed to do. Its hunger is so insatiable that it eats its own flesh; it eats its offspring; and it eats the future. The catabolic effects are inescapable and its death rattle reverberates for miles. An entire city lives inside this beast. Yet in this late hour, inhabitants put their heads down and carry-on as usual, for they are all dependent upon this monster for their very own food, water, and shelter. No one dares utter a stray word, until the day one brave soul holds up a mirror that reveals who they have become.

A decade ago, I attended a series of contentious activist meetings with Rio Tinto, the mega-mining corporation that owns the massive Kennecott copper pit in the Salt Lake Valley. Rio Tinto planned to expand the mine, and activists were pushing back. The meetings foundered and collapsed upon the lack of viable possibilities for avoiding local impacts and for making operations more sustainable. Activists’ proposals were considered impractical and unprofitable. Ultimately, Kennecott got its expansion and activists got nothing. 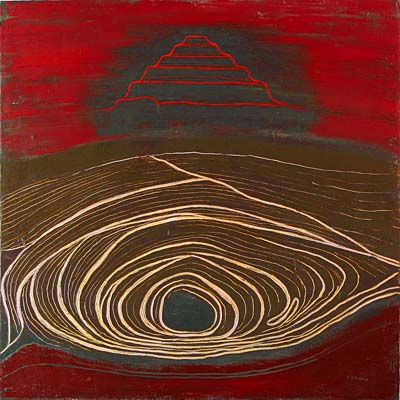 An early Egyptian pyramid is seen with the gaping hole of the Kennecott copper pit. As civilization builds up monuments to itself, it must tear down into Earth for her treasures.

As a visual artist, I took my angst to the studio and captured eviscerated earth in a series of paintings and drawings, depicting large-scale mining operations that are rarely seen or considered by the public. What better way to reveal our civilization's insatiable hunger for resources?

I realized that the mining industry cannot be greened, intrinsically by its very nature. Mining casts a long shadow: habitat loss, land theft, worker exploitation, local health impacts, and groundwater contamination, to name just a few issues. Without mining and other forms of extraction, Industrial Civilization could not exist. Yet we rarely ponder our Wonder-World’s material basis and its extraction costs.

Turns out I’m not the only one working in this vein – far from it.

This year a broad panoply of photographers, painters, poets, and printmakers are raising a ruckus in a four-continent constellation of almost sixty exhibits, installations, performances, and events under the rubric “EXTRACTION: Art on the Edge of the Abyss.” When EXTRACTION originator Peter Koch announced the project, it took off like wildfire. Creators are shining lights on all forms of the omnivorous extractive industry, “from mining and drilling to the reckless plundering and exploitation of fresh water, fertile soil, timber, marine life, and innumerable other resources across the globe.” The project’s broad definition begs the questions: In our civilization, what isn’t based on extraction? What isn’t affected by extraction?

The Algonquin word “wetiko” reveals extraction as a symptom of the culture-wide soul-sickness driven by domination, greed, and consumptive excess. It blinds humans from seeing ourselves as part of an interdependent whole, in communion with all of life. It is through this toxic mindset that the world is divided up and consumed for profit.

Extraction is an uncomfortable topic: it confronts us with our system’s voracious appetite for taking Earth’s riches without reciprocity – the very epitome of wetiko. Sure, we can point at capitalism, corporations and elite interests, but as participants in this wetiko culture we are all infected by this mind virus.

Many of the proposed “solutions,” are just new iterations of the same paradigm, bringing more extraction.

Far beyond a “problem” – extraction and its consequences pose a predicament without escape. Humanity is hitting planetary limits: declining resources, excess CO2 in the atmosphere, and plastic choking our oceans. Many of the proposed “solutions,” are just new iterations of the same paradigm, bringing more extraction. For example, see our blog "We are Strip-Mining Life While We Drink 'Bright Green Lies'" as to why “green” tech will never save us. Humanity has dug itself deep into a hole from which few of us may emerge.

Since stories create meaning, the “wetikonomy” seeks to maintain itself through a tight control over its own narratives. In our situation, the system rewards those that uphold its delusions: endless growth, techno-magic, fulfillment through consumption, and superiority over nature. We are told there is no alternative and things are getting better all the time. 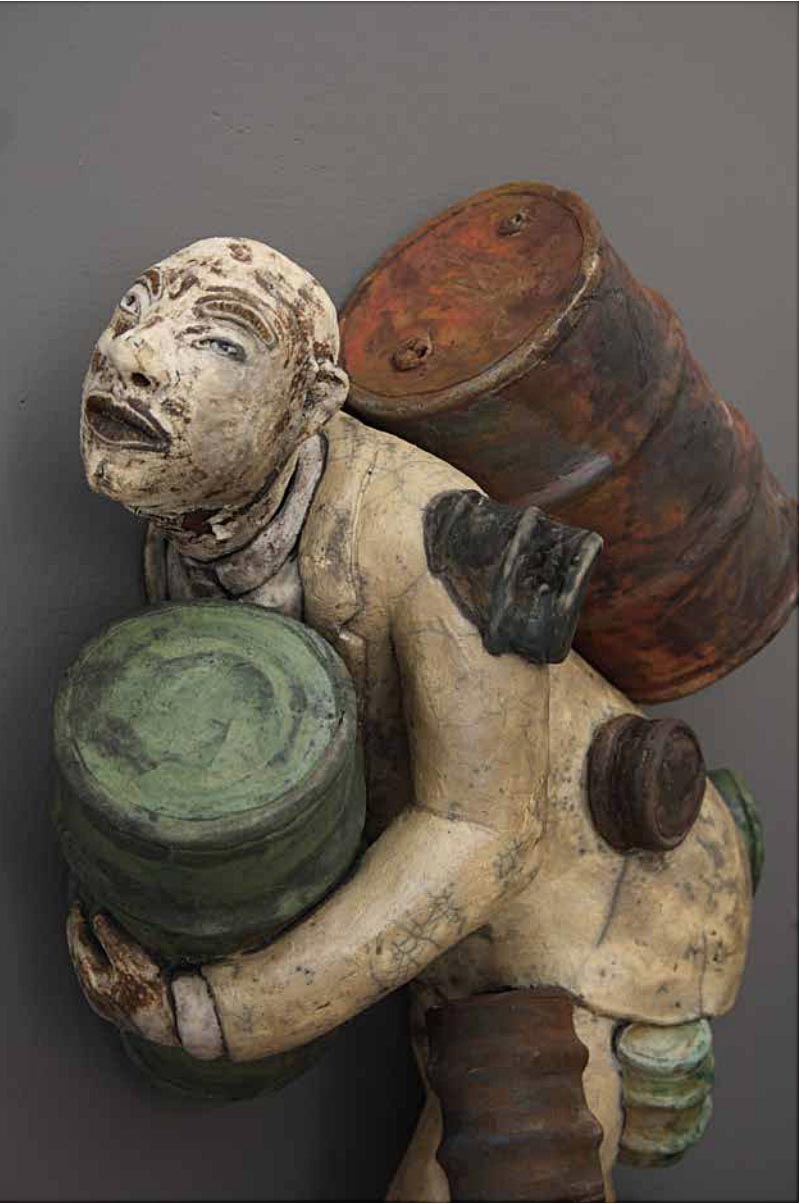 Clinging to the same mentality at the root cause of the crises.

The pressure to act according to these grand-yet-contradictory narratives is pervasive, which means compliance is near-universal. Witness the charades played by world leaders and diplomats at decades of climate conferences, giving lip service to fossil fuel phase-out while maintaining the techno-growth-extraction paradigm – essentially mocking the stated climate goals by clinging to the same mentality at the root cause of the crisis. Does anyone think this year’s climate conference, COP26 in Glasgow will play out differently?

Why are people so willing to surrender their agency? Society is captivated by a grand bargain described by social critic Lewis Mumford in his 1964 essay “Authoritarian and Democratic Technics”:

The bargain … takes the form of a magnificent bribe … each member of the community may claim every material advantage … food, housing, swift transportation, instantaneous communication, medical care, entertainment, education. But on one condition: that one must not merely ask for nothing that the system does not provide, but likewise agree to take everything offered … Once one opts for the system no further choice remains.

In other words, the bribe offers everyone a share in the largess, that is, the cornucopia of material goods unleashed by this industrial economy — as long as one does not question the costs to others, to ecosystems, or to the future.

Like a gruesome carnival display, skeletons show us our worst toxic legacies and their consequences.

The wetiko-spirit hates to be seen and named, as this begins to dissolve its parasitic power over its host. Dissent against the existing paradigm is ignored, penalized, or co-opted – that is, absorbed into the hegemony. Until it’s not. The time comes when costs become unbearable, limits are reached, and opposition finally boils over.

Thus, the last thing the power structure wants is a cultural spotlight on extraction, which exposes the core of our malady. And certainly not through art, which has a visceral, soul-level power – a power that scientific reports, statistics, and warnings do not have. Art can play a prophetic role: bearing witness to unsettling matters and grabbing attention before we can turn away. It can portray possibilities previously unconsidered, vitally needed at this time.

This very large scratchboard drawing was inspired by Moby Dick and the history of whaling in America. The whale’s skin is embedded with a history of capitalism in America—images of human and environmental exploitation and destruction since 1850.

Or, the Whale (detail)

EXTRACTION co-founder Edwin Dobb (now deceased) posed the question of our time: Can we break the spell? A growing chorus on the periphery – Greta Thunberg, poets, painters, performance artists, Extinction Rebellion – is revealing the sociopathic end-game holding us in its grip and unraveling slowly in real time. Learning to see wetiko within ourselves and our culture can begin to break its spell. Can we come to see our own hubris? Contraction is coming whether we like it or not – how can we deal with this if we are spellbound? We have no individual or collective roadmap for the coming post-extraction Reality.

Can we come to see our own hubris?

The EXTRACTION project’s exhibits and events are winding down, although organizers hope for continuation in some form. Only a few more venues are scheduled to open, yet its effects will continue rippling outwards. The project has legitimized the extraction art movement and showcased some of today’s most potent work. It has broadened my own definition of extraction-inspired art, which helps me see new possibilities. The project will live on in the evolving work of extraction artists and in others forging authentic responses to our global predicaments. Art is all-too-often wed to money and societal embrace, compromising its own power and obscuring rather than illuminating Reality. Artmaking on the margins is not easy, so supporting this work is necessary. 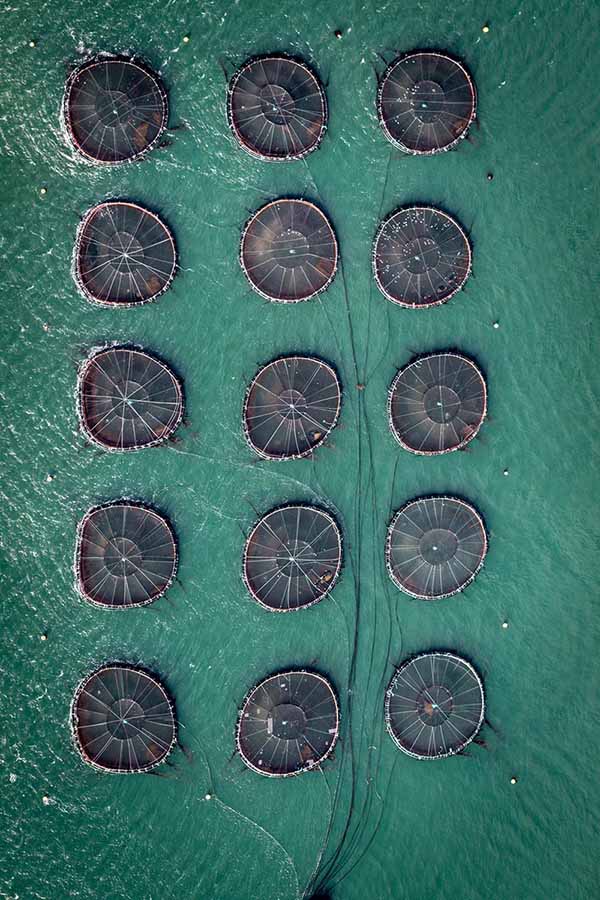 Art that challenges the wetiko-extraction paradigm will become even more relevant, as extraction’s impacts widen. Extraction art is not going away, until extraction itself goes away. While industrial-scale extraction has “only” been with us for four hundred years, art has been with us for thousands of generations, since our early ancestors rendered images inside caves.

Listen to an audio of this blog, narrated by Michael Dowd.

Learn more about the EXTRACTION project.

EXTRACTION megazine (648 pages): download for free or purchase a printed copy for $25 + $7 shipping.

Partly a group catalog of extraction-related artwork, each artist or creator’s individual contribution documents their own personal investigations into the extraction question. The project is by no means limited to the visual arts—in these pages you will also find poetry, critical writings, philosophical treatises, manifestos, musical scores, conversations, historical or found photographs, and much more.

Make a donation to the EXTRACTION project.