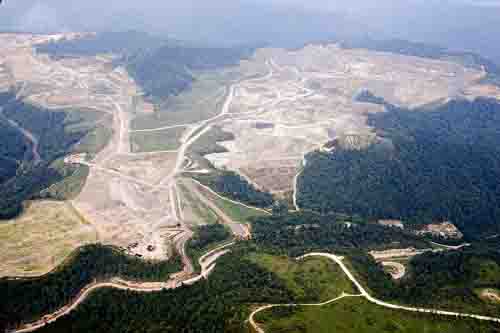 Mountaintop removal for coal has turned regions of Appalachia into devastation zones.

We must now turn away from our costly, dirty, and deadly energy path. We are entering the era of "extreme energy" in which operators go to great lengths and risks to extract the remaining fossil fuels. As conventional reserves of cheap, easy-to-extract coal, oil and gas dwindle, fossil fuel extractors are turning to costlier, dirtier, harder-to-extract "unconventional" reserves, and to high-impact drilling on farmland and within towns and cities. On our present course, the impacts and devastation will only increase over time, as more localities become sacrifice zones. 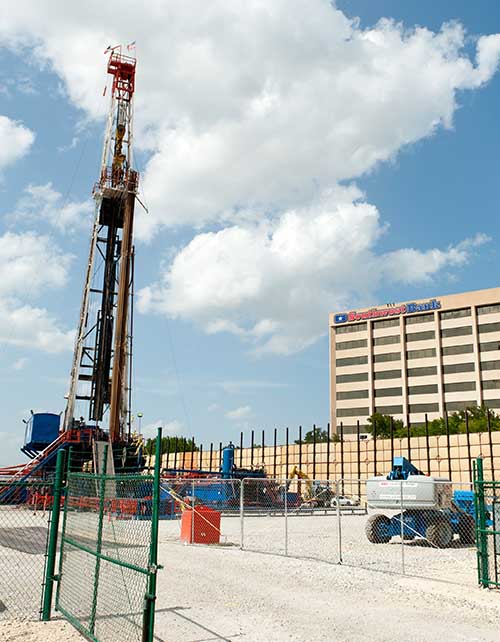 Fracking operation near a bank in Fort Worth, Texas. 15 million Americans—that’s 5%—now live within one mile of an oil or gas drilling operation. Ever increasing numbers of wells are required in the US to maintain output.

The quality—the energy density—of these reserves is lower, so their footprint becomes ever larger. For example, gas fracking wells run dry faster, so far more wells must be dug to extract the same amount of fuel. As easily pumped liquid oil is depleted, heavier oils must be mined or heated underground for extraction. As underground coal mines thin out, new mining operations destroy mountains and ecosystems. Typically, vast amounts of water are required for unconventional production. (For more impacts, see box below.)

Unconventional extraction processes release much higher levels of greenhouse gases, so as extreme fuels comprise more of the total fossil fuel production, the climate impact proportionally becomes even greater. But even though remaining reserves are becoming more problematic to extract, they are more than sufficient to roast the planet. This is the hidden reality behind the promise of America's bright new abundant oil and "clean" gas future that the fossil fuel industry portrays.

The US and the world have embarked on a course of dependency on poor quality fossil fuels. The industry itself is still pursuing new fossil-fuel projects. Investment in unconventional fuel extraction and distribution is expected to be three times greater than spending on renewables, according to the International Energy Agency.[1] Michael Klare, an expert on natural resource issues, predicts "an increasingly entrenched institutional bias among energy firms, banks, lending agencies and governments toward next-generation fossil-fuel production, only increasing the difficulty of establishing national and international curbs on carbon emissions."[2]

Any further investment in fossil fuel projects and infrastructure further commits us to "locked in" carbon emissions and to our planet laid waste. Increasing reliance on these destructive resources is not a sign of technological innovation; it is a sign of desperation.

This dangerous trajectory can only be reversed by a culture-wide acceptance of the dangers posed by unconventional fuels. The current resistance campaigns by local citizen's groups are important, but must be supplemented by a large public call for a society-wide mobilization, to drive a comprehensive shift in fossil fuels reduction.

The future of humanity and all of life depends on keeping most remaining fossil fuels in the ground. Americans must be called to rise and meet the challenges facing us.

Coal mountaintop removal is a devastating extraction method. In southern Appalachia, mining companies have leveled 500 mountains, wrecking an area the size of Delaware. Waste rock is dumped into headwaters and streambeds, which pollutes waters downstream. The blasts damage nearby homes and cover communities with toxic coal dust causing high rates of cancer and heart disease.  Coal slurry (from processing) is held in hundreds of impoundment ponds throughout the region.  Extractors often leave the land stripped and conduct the minimally required level of reclamation, which never returns land to its formerly healthy condition.

Oil tar sands production in Alberta, Canada has turned a Florida-sized stretch of boreal forest into a toxic wasteland. The production of tar sands “syncrude” pollutes vast quantities of water and releases huge amounts of greenhouse gases. Climate scientist James Hansen says that if we develop tar sands, it will be "game over" for the climate. Activists have opposed the construction of the Keystone XL Pipeline from Canada to the US Gulf Coast, which would facilitate the exploitation of the tar sands. Yet already over a million barrels per day of tar sands bitumen flows into the US through the existing network of pipelines.

Gas and oil "fracking" has been especially ruinous. Across the nation, gas and oil extractors increasingly use hydrofracturing techniques, injecting a brew of toxic chemicals underground, polluting groundwater, and leaking more methane into the atmosphere than do conventional processes. Many complaints of foul water, severe illness, and livestock poisoning had been filed.[3] The industry and government approach has largely been to “frack now, worry later,” while proceeding at full speed without assessing the impacts.

Fracked shale gas also poses a clear and present danger to climate stability through substantial venting of methane.[4] Methane is 84 times more potent in greenhouse capacity than CO2 for the first 20 years. The industry's own research shows there is no practical way to create a leak-proof fracking well due to failures in cement casings.[5] Essentially, fracked gas is no better for the climate than coal and is likely far worse. Shale gas now accounts for about 40 percent of overall US gas production.

[1] International Energy Agency, "World Energy Outlook 2012."  The agency forecasts that cumulative worldwide investment in new fossil-fuel extraction and processing will total an estimated $22.87 trillion between 2012 and 2035, while investment in renewables, hydropower, and nuclear energy will amount to only $7.32 trillion.