This outline proposal shows how a modest sum—$500,000 for a one-year demonstration—can prove the necessity for a national “emergency climate mobilization” and build a Climate Emergency Coalition with partnering organizations. Following demonstration, the US can be quickly galvanized into a consensus on Emergency Climate Mobilization within the timeframe required to stabilize the climate, while including a justice and equity framework.

To respond effectively to the climate crisis, we need an all-hands-on-deck Climate Mobilization to achieve net zero greenhouse gas emissions at wartime speed. Because of the nature of the looming climate crisis[2], the fate of civilization and of our living systems hinges on a Climate Mobilization response. The over-determined data shows that there is actually no remaining carbon budget, therefore we must phase-out fossil fuels now! 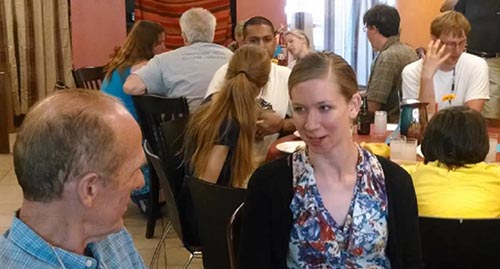 It is through our web of associations and relationships that we best develop understanding and emotional response—by arriving at a social interpretation of the data. Sociologist Robert Brulle, Drexel University, says that engaging people face-to-face is "the only way to achieve real, lasting change [for the climate]."[3] We are relational creatures, and we get involved when people that we know and respect are involved. Explaining climate change must be personal and interactive—virtual or social media are insufficient for organizing citizens and expanding the movement.

A consensus on US Climate Mobilization must come quickly. If achieved within a couple of years, the US can achieve the target of Net Zero Carbon by 2025. To achieve the degree of transformation required—even including the conservative Congress—we only need 3-4% of the population joining the call for mobilization with us. That means recruiting enough mobilizers through an Education and Advocacy Campaign that provides personal, face-to-face dialogue, and moral conversations. There are already tens of thousands of faith social halls and civic auditoriums ready to host this cultural conversation. The initiative galvanizes those most concerned about the climate threat, thus building a decisive Climate Coalition with partner organizations. Change of this magnitude can only happen through organizing while raising and deepening public awareness.

Citizens need to understand how quickly and effectively we must respond to avert climate chaos. They must appreciate the details of the encroaching climate crisis, the necessity of an all-out mobilization, the advantages of a carbon price and its affordability, climate justice issues, and why US leadership is crucial. We explain the scope, scale and urgency of the crisis; in addition we explain why the Coalition is the necessary response to uniquely meet these daunting challenges.

The curriculum is riveting and inspiring. It is designed to catalyze action and precipitate appropriate responses.

The First Phase of the Climate Emergency Coalition Campaign will employ the existing southwest network of Interfaith Power and Light to coordinate the necessary personal conversations and education at their disposal through the thousands of venues available: congregation social halls, civic auditoriums, and public meeting places across those states. The states include Utah (convening), Arizona, New Mexico, Colorado, Texas, and Tennessee.[4]

The $500,000 budget includes salaries for a Project Coordinator and six State Coordinators, consulting fees, and curriculum development (includes the guidance of leading scientists).

The Demonstration will quickly lead to the adoption of the full CEC Campaign nationwide to achieve consensus on mobilization within a two-year period.

[2] We are already committed to an inevitable heat increase "in the pipeline"—due to the lag in ocean heating—even if we cut all emissions today. So today’s greenhouse gases levels are already very dangerous.

[4] A response to a request for proposal can provide extensive detail and justification.