Of course, events in and around our world have gotten so egregiously curiouser and curiouser, that we thought it important to lend some interpretation, call it briefing, before we all become mad-hatters!  Now to be sure, we are lending to ourselves as well, because it is important to try to make some sense of events, even in the face of unrelenting non-sense.

First, start with the Republican Congress: “What cruel kindness,” you say, in your oxymoronic way! When the Republicans dealt with Obama as President, they voted to kill his Obamacare how many dozen times? If you count their promises to demolish it, there were approximately 1,244 dozen “votes.”  And this year when they took over power, they promised, with Trump triumphant, to end Obamacare on their very first day, given all of their majorities everywhere!

So, with their umpteenth Trumpcare presented, we now see that Trumpcare is Humpty-Dumpty after the Donald’s Great-fall, and Obamacare has become the constant variable in our genuine imitation world. So, you ask, “Can we go back through the Looking-Glass now?” And we think, “Yes, of course.  It’s all virtual reality, anyway, as you know!” 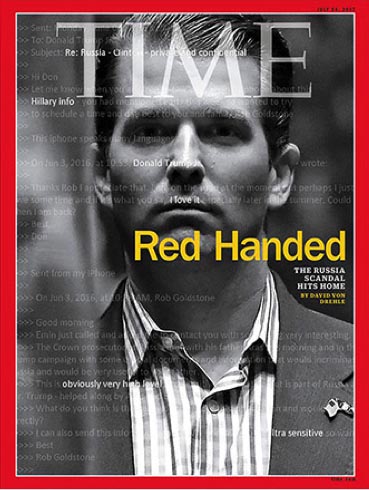 Second, just go back a few days and find Junior Trump “red-handed” by his own admission.

The admitted guilt provided Trump Jr’s own private oxymoron, as he seemed to say that admission = exoneration, so (wait for it)………..Guilty-Exoneration! More Reality, with the Tragic lacking both Tragedy and Catharsis. We are left with another oxymoron, since it feels like empty-constipation. 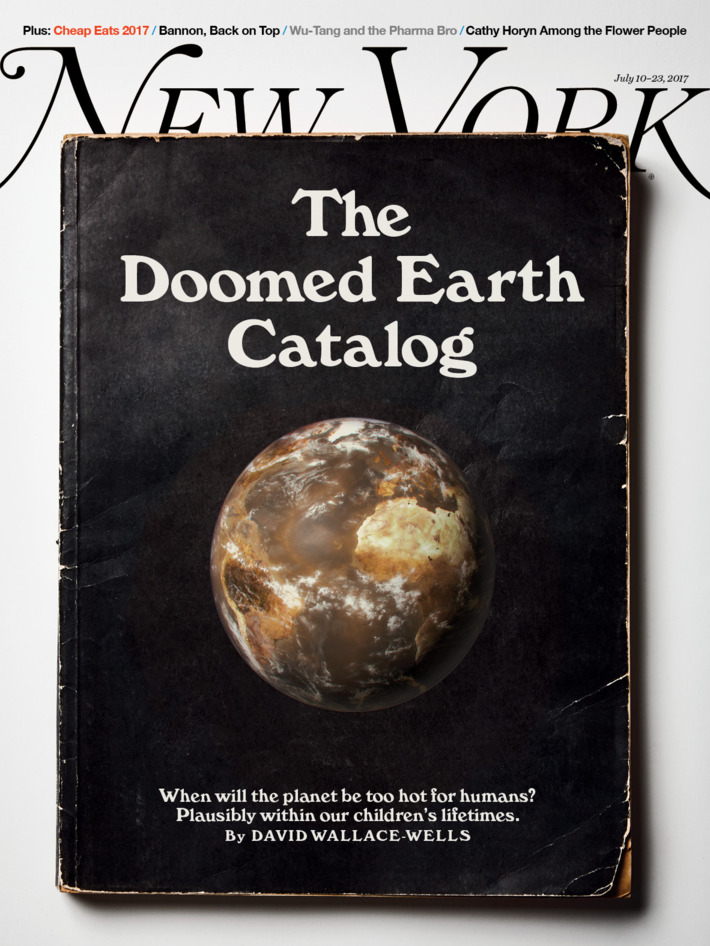 The third and the main event – although it is a main event criticized, trivialized, and ignored, (wow, is everything becoming just a deafening silence?) – New York Magazine’s most read article ever, and we are sorry to say, another oxymoron: The “Doomed Earth” issue is the current one, so catch the spirit-of-the-times – linked is the annotated edition of “The Uninhabitable Earth.”

If you are unsure that you are able to read the article because you are afraid of its accurate rumors, the Briefing Room editors would like to report it is awfully good, despite some of the criticisms launched by climate advocates “on our side.”

We will summarize Uninhabitable Earth: Disaster is coming. Because of benign neglect, by continuing to do what we are doing – we could make our planet uninhabitable.

Before you go back through the “Looking Glass,” try the NY Mag article; you will find relief from the curiouser and curiouser. While it’s not comic relief, it’s Reality Relief. Now, those of us working in the Briefing Room, need Reality. Relief through Reality. Stay tuned…………Despite its critics, Reality is more than an oxymoron. Really!

Perhaps now it’s time to turn to a bit of Reality, as she tries to peek from under the blanket where it has been hiding. Hiding from lack of interest. But, even if there is no persistent interest in Reality, perhaps we can give her five minutes or so.

We know we are in the middle of the Global Warming Emergency.  It means we must push away from fossil fuels like “last year’s news.” Fossil fuels are “so completely last century!”

The “Reality” question we pose is, “Why is the global warming crisis unseen and trivialized?”  And we suggest answers to the question – reasons that many people do not see, feel, or smell the severity of the crisis. We will just suggest five reasons; one for each minute:

Perhaps the most important bottom line of this report from the Briefing Room, the room where ATL and its partners provide updates and analysis on the Climate Emergency and the Ecological Holocaust, is that we can and will connect the dots on these over-arching and determinative crises. More importantly, we can explain how to answer the question of “What to do, by When, and Why.”

Consider this for yourself: Can you explain, in general terms what it is that we need to do in order to hold the climate stable at under 2◦C warming since the start of the techno-industrial “Revolution?” Can anyone you know explain these parameters?  Can you tell, even in the most general terms, why it is that most of what you read or hear about the Climate Crisis is a “heap of non-sense?” And if this is the most critical crisis all of us has faced since we began what we like to call “Civilization,” why can no one explain the “What, by When, and Why” so that a teenager just beginning high school can grasp it?

These are some of the essential questions, which we will pose, then address through briefings to come.  Rest assured, there are answers to these questions, quantifiable answers with real numbers attached. Thus, by analogy, there are solutions to the Climate Crisis. Solutions that can mean that we can leave a livable world to our descendants, and fulfill our Constitutional Promise to everyone:

We the People of the United States, in Order to form a more perfect Union, establish Justice, insure domestic Tranquility, provide for the common defence, promote the general Welfare, and secure the Blessings of Liberty to ourselves and our Posterity, do ordain and establish this Constitution for the United States of America.

This is the promise that we all learned and all recited as children in grammar school. It is time to take it seriously. We can shed our fear, leave aside our confusion, and determine to become what we pledged and promised, and what we can provide.