We have to realize that a true ecological approach always becomes a social approach; it must integrate questions of justice in debates on the environment, so as to hear both the cry of the earth and the cry of the poor.

Some of most vexing and unresolved aspects of the climate crisis involve issues of justice and equity. No climate strategy has a moral center without including the call for Justice. The Association for the Tree of Life and the Climate Emergency Coalition agree with Pope Francis’s call for justice, both for the underprivileged and for our Earth itself, highlighting climate chaos as an environmental, economic, equity, and moral crisis. His demand for the rich and powerful to care for the earth fits well with how we ask philanthropies to fund the march to climate mobilization. We also endorse the Fair Shares approach to applying equity.

Climate justice is complex—here we explain the necessity of climate assistance for poor nations, why an effective response must start with the United States, and the importance of citizen action to accomplish this.

The Paris Agreement and Justice

We fully support the Principles of the UN Framework Convention for Climate Change, as they demand that the more wealthy nations help with funding, technology, and personnel to support nations who cannot afford low carbon energy otherwise.

From Article 3.1: The Parties should protect the climate system for the benefit of present and future generations of humankind, on the basis of equity and in accordance with their common but differentiated responsibilities and respective capabilities. Accordingly, the developed country Parties should take the lead in combating climate change and the adverse effects thereof.

In 1992, the United Nations Framework Convention on Climate Change (UNFCCC) was adopted by nearly all nations as the foundational agreement for equitable international climate negotiations. However in the quarter century since, weak and stalled international climate talks have continually postponed effective responses, nearly closing the window of time available to avert the worst aspects of looming climate catastrophe.

While the UN 2015 Paris Climate Agreement provides a significant “what” (a 1.5-2°C target in response to demands by certain nations vulnerable to sea level rise), its “how” and “by when” do not provide any pathway to accomplish the target. The bottom-up approach, with nations’ pledges (INDCs – Intended Nationally Determined Contributions) resulted in highly unequal levels of commitment and effort, far too little assistance for poor nations’ climate mitigation and adaptation, and a dangerous course towards 3.5°C this century, far above the 1.5-2°C goal. The Agreement’s five-year schedule to review pledges also makes staying within the target highly unlikely.

So given Paris’s varied shortcomings, how can the world possibly move forward cooperatively and fairly in meeting the true scope, scale, and urgency of the climate crisis? 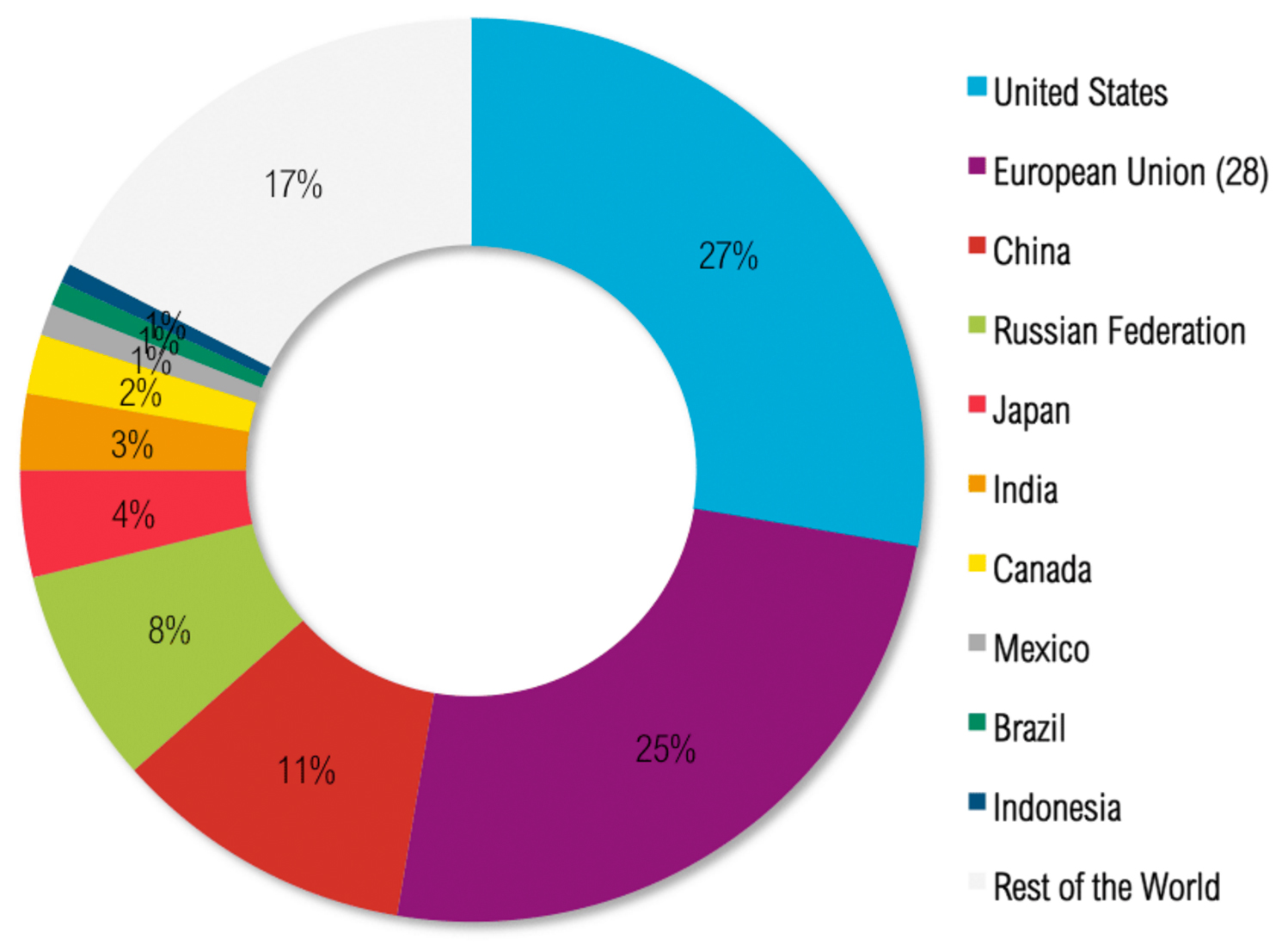 One of the most contentious divisions between wealthy and poor nations involves “differentiation”—how to fairly assign responsibility among nations for curbing emissions. Fairness requires two major considerations, in accordance with the UNFCCC principles:

Wealthy nations have such large historical emissions, that equity cannot be achieved just through their own emissions reductions. They must also offset their historical emissions with assistance for developing nations for both climate mitigation and adaptation. The mitigation that poorer nations will need to implement, with international support, accounts for a substantial portion of the global reductions required. 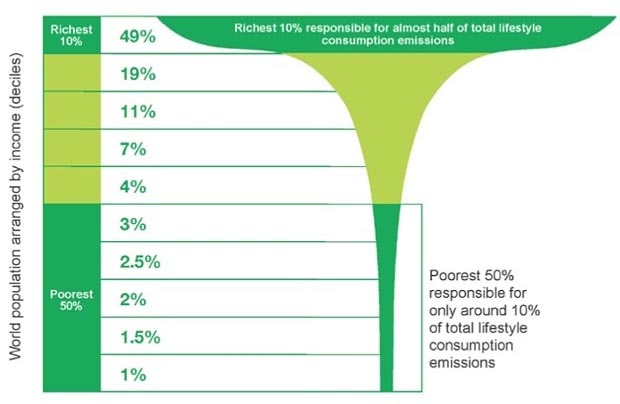 In a recent report, “Extreme Carbon Inequality,” Oxfam finds that the world’s richest 10% emit half of all fossil fuel pollution, while the poorest 50% contribute a mere 10%. The richest 1% may emit 175 times more per person than the poorest 10%.

The imbalances of wealth and consumption between the wealthiest of humanity and the poorest are simply unconscionable. The majority of citizens within developed nations enjoy abundant “luxury emissions,” while many in developing nations lack even “survival emissions” for basic necessities. Consider that 1.3 billion people globally have no electricity and 1.2 billion have unreliable electricity—a third of the world’s population. That portion of humanity both desires and deserves the right to lift itself from destitution. Additionally, poor nations are especially vulnerable to the impacts of climate change. They want to fight it and prepare for it. For these reasons, they need help from wealthy nations.

Crucially, if wealthy nations do not provide massive assistance to impoverished nations (financing, technology, and capacity building), then they will continue to take the cheaper, dirty fossil fuel development pathway. In that case, no matter how quickly rich countries cut their own greenhouse gas pollution, the Earth and her human community will face climate chaos and ecological ruination.

As Africa leapfrogged past landlines straight to mobile phones, developed nations must help the poor nations to leap over and beyond  fossil fuel economies. In what little carbon budget remains, we must include developing nations’ need to alleviate poverty. 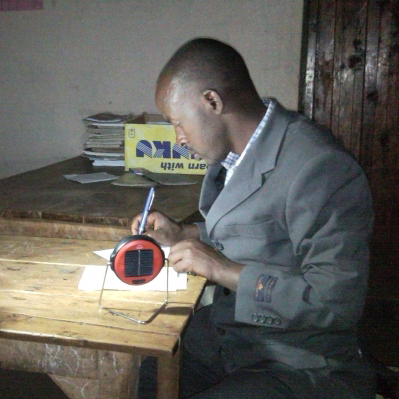 “In February 2014, in rural Kenya, we toured the front lines of oil eradication in African lighting, with a SolarAid field team. We saw that it is not difficult at all to replace a whole sector of fossil fuel use at the bottom end of the energy ladder.”

In 2009 the world established the Green Climate Fund at Copenhagen, within the framework of the UNFCCC, as a mechanism to assist developing nations with mitigation and adaptation. The goal by 2020 is $100 billion per year, an amount that is far too little. Even attaining that funding is in doubt. For an updated status of financing, see: Status of Pledges and Contributions to the Green Climate Fund.

In spite of this, from the widest perspective justice is not a “nice thing to do, the right thing to do, or even the morally correct thing to do.” Beyond helping the poor, equity and justice must be understood as necessary for our collective survival. Each of us must be included on the “survival boat.”

The shortfall of developed nations’ commitments amply demonstrates that equity is not something that each nation can decide for itself. It must be defined in a robust, rigorous, transparent, and scientific manner anchored in the core principles of the UNFCCC—an agreement that would produce a dramatic reduction of emissions, even while allowing the developing world to expand energy use to relieve poverty. The Fair Shares approach provides such a mechanism. An equitable system such as Fair Shares should be employed to determine all nations' responsibilities for carbon reduction.

Fair Shares also addresses the vast wealth disparities within countries. Nations such as China and India have growing numbers of wealthy citizens with high levels of carbon consumption.

What Does This Mean For “US”?

What does all this mean for “us,” the United States? The US is key to turning the situation around. The United States must lead the world's transition; as no other nation can—given our unequaled wealth, our role as the largest historic carbon polluter, and our capacity to remedy the situation.

To sum it all up: wealthy nations—especially the US—must pay up big time to assist developing nations reduce emissions, while at the same time drastically cutting our own. The reality is that it will demand enormous financial help, human resources, and technological transfers to developing nations. At the same time, we must see this as an urgent priority. We seem to manage hundreds of billions of dollars for military fighter planes, even though climate change is our biggest national security threat. A good response would be to end fossil fuel subsidies—$700 billion annually in the US—and apply that money towards climate assistance and our own climate stabilization efforts.

In spite of our role as the largest historic perpetrator, Americans are mostly unaware of the crisis, and of our continuing fossil fuels excesses. We are 5% of the population but emit 15% of the world's CO2—one of the highest rates per capita. In our ignorance, we continue in our historic consumption patterns, and we continue to foster fossil fuel dependency. Therefore, we continue to burn up what little carbon budget remains.

However, we cannot expect the US to lead without informing Americans about the necessity of climate justice for the survival of us all. A Climate Emergency Coalition Campaign across the US, with personal face-to-face dialogue and moral conversations in our “communities of meaning,” can inform and galvanize citizens on this crucial issue. We must grow a substantial people’s movement, a Climate Emergency Coalition that demands justice and equity as part and parcel for protecting a livable climate.

Fair Shares: A Civil Society Equity Review of INDCs – a new analysis from a diverse mix of civil society organizations seeking to ascertain the fairness of the Paris Agreement. Association for the Tree of Life and Climate Mobilization Coalition are both signatories.

What Is Equity in the Context of Climate Negotiations? – Edward Cameron and Wendi Bevins, World Resources Institute, December 14, 2012