Legacy of the First Earth Day 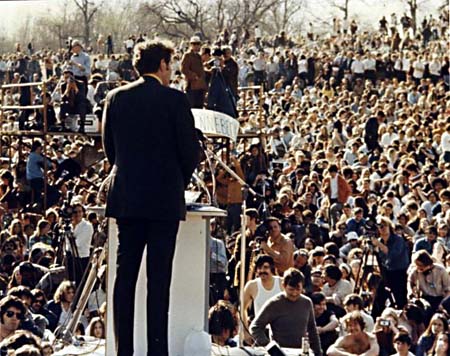 Where would we be now, had we continued the environmental progress and momentum generated by the First Earth Day in 1970?

In the 1960s, Rachel Carson's watershed book Silent Spring awakened a major shift in understanding our connection to our environs. By 1970, over half the US public believed pollution was one of the top issues facing the nation. That year, the first Earth Day brought out one in ten Americans to call for reforms, described by journalist Mark Dowie as the "largest one-day outpouring of public support for any social cause in American history." Roughly 1500 colleges and 10,000 schools organized teach-ins. Tens of thousands organized local events such as parades, demonstrations and protests.

As the result, Republicans and Democrats together passed a portfolio of landmark environmental policies during the Republican administrations of Richard Nixon and Gerald Ford. Environmental advocacy groups emerged at the time and played a vital role in the reforms.

December 1969: Gaylord Nelson, a US Senator from Wisconsin, hires 25-year-old Denis Hayes to direct a national “teach-in” about environmental issues. Hayes recruits a handful of young college graduates to come to Washington, D.C. and begins planning what will become the first Earth Day.

January 1, 1970: Congress passes the National Environmental Policy Act (NEPA), requiring every federal agency to prepare an Environmental Impact Statement (EIS) for any legislation. The Act’s passage is due in large part to the public outcry that resulted from the Santa Barbara oil spill the year before.

January 14, 1970: General Motors' president Edward Cole promises “pollution free” cars by 1980, citing the removal of lead from gasoline and the addition of catalytic converters as means to stop deadly emissions.

January 22, 1970: In recognition of the growing media attention given to the approaching Earth Day, President Richard Nixon stresses the importance of environmental issues in his State of the Union Address.

Some opponents condemn the movement to organize a national Earth Day as an unpatriotic deflection from the war in Vietnam. Others point out the fact that April 22, 1970 is the 100th anniversary of Vladimir Lenin's birth, and warn Americans that Earth Day could be a clever communist plot. 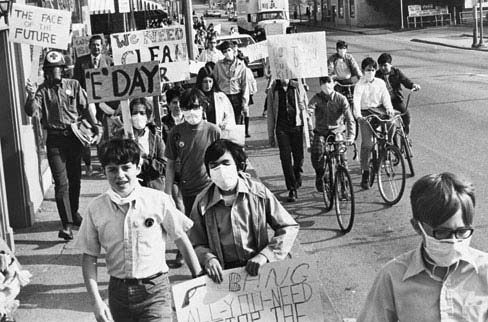 April 22, 1970 - Earth Day: The first national Earth Day. Co-chaired by Congressman Pete McCloskey and coordinated by Denis Hayes, the first Earth Day takes the form of a nationwide protest against environmental ignorance. An estimated 20 million people participate across the country, in what will ultimately be the largest demonstration ever in American history.

June 1970: The Natural Resources Defense Council (NRDC) is established to provide citizens with the tools to draft environmental laws and lobby for their passage.

July 9, 1970: President Nixon works with Congress to establish the Environmental Protection Agency (EPA), a new Federal agency primarily responsible for United States environmental policy. In its first year of operation, the agency will employ over 4,000 Americans. The EPA will be responsible for the passage of environmental legislation, ecological programs, and research.

October 2, 1970: The National Oceanographic and Atmospheric Administration (NOAA) is created to monitor and improve the conditions of the oceans. NOAA enforces the sustainable use of resources of coastal and marine ecosystems and supplies environmental information to the public.

November 1970: During the election cycle after Earth Day, Denis Hayes organizes a movement to unseat “The Dirty Dozen” - a list of 12 members of Congress with infamous records on environmental policy. The movement will successfully remove seven of the incumbents, and earn the environmental movement significant political clout in the legislature.

October 18, 1972: The Clean Water Act (CWA) becomes the primary legislation governing water pollution in the country. The goal of the CWA is to eliminate toxic substances in water and to uphold surface water to a national standard of cleanliness. The act, an amendment to the Federal Water Pollution Control Act of 1948, bestows enforcement authority on the EPA and restructures previous water quality regulations.

October 31, 1972: Dennis Meadows co-authors The Limits to Growth, a study of the interaction between population, industrial growth, food production and ecosystem limits. In the book, Meadows demonstrates with clear diagrams and linear models that Earth’s resources are being steadily used up, and as these resources drop, human population is expanding exponentially. The Limits to Growth predicts that by the middle of the 21st century, Earth’s population will no longer be sustainable and the ecosystem will completely collapse.

December 31, 1972: DDT is banned in the United States, the result of nearly 10 years of legislative battles. Since Rachel Carson’s Silent Spring first brought DDT into the spotlight in 1962, the government formed investigative panels and committees to substantiate the danger of the pesticide. With the ban, the Administrator of the EPA , William D. Ruckelshaus, stated his conviction that “the continued massive use of DDT posed unacceptable risks to the environment and potential harm to human health.” 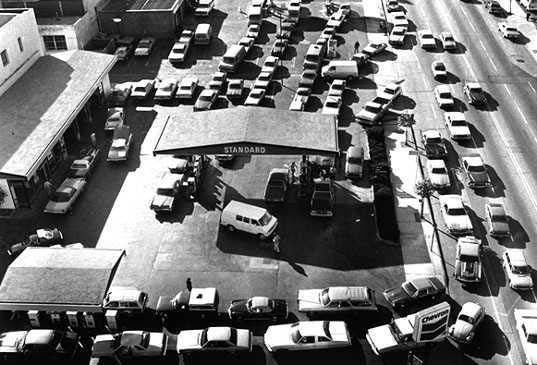 October 1973 - March 1974: During the Arab Oil Embargo, energy demands exceed supplies in the United States for first time. The fuel shortage results from the suspension of oil shipments to the US, with gas prices skyrocketing and the price of a barrel increasing 400% from $3 to $12 a barrel. The energy crisis fuels immediate research into alternative energy and creates a new dialogue about energy security for the United States.

December 28, 1973: Congress passes the Endangered Species Act in order to prevent the extinction of animals in the United States. This act restructured the 1966 legislation regarding endangered species and directed the US Fish and Wildlife Service and the NOAA to carry out its stipulations.

June 28, 1974: Chemists Frank Sherwood Rowland and Mario Molina claim that Chlorofluorocarbons (CFCs) can destroy ozone molecules and may erode the Earth’s protective ozone layer. A report released two years later by the US Academy of Sciences will provide further scientific evidence to support the hypothesis of ozone depletion. In 1978 the United States will ban the use of CFCs in aerosol cans, but is not until the early 1990s that CFCs will begin to be phased out of product production.

August 17, 1974: The Forest and Rangeland Renewable Resources Planning Act of 1974 (RPA) is enacted in an effort to monitor forest resources in the United States. The RPA mandates comprehensive assessments in order to supervise forest supply.

December 12, 1974: The EPA is charged with settling and monitoring water quality standards with the Safe Drinking Water Act (SDWA), covering every public water system across the country.

January 3, 1975: The Eastern Wilderness Areas Act protects over 200,000 acres of National Forests. This legislation is the first to protect lands that were once logged or previously inhabited.

October 11, 1976: The Toxic Substances Control Act mandates the EPA to control all new and existing chemical substances being used in the United States. The act controls polychlorinated biphenyl (PCB) and other toxic products, although the management of existing chemicals are grandfathered and untouched by the act.

October 21, 1976: The EPA is given complete control over hazardous waste in the Resource Conservation and Recovery Act, which mandates the agency manage all aspects of toxic waste management.

October 22, 1976: The following day, National Forest Management Act requires the Secretary of Agriculture to monitor forestlands and to develop a standard to manage each unit of the National Forest System.