"It’s Time to Stop Waffling So Much and Say that the Evidence is Pretty Strong…
Multi-meter Sea Level Rise is an Issue for Today’s Public, not Next Millennium’s."
-- James Hansen, July 27, 2015

At the climax of our massive burning of hydrocarbons, and before achieving a beautiful post-fossil-fuel future, we find ourselves now on the horns of a dilemma: We still have enough oil, coal, and natural gas to trigger climate Armageddon. We know we must leave the vast majority of their reserves buried, some 75% and counting, if we are to stop frying the planet and ourselves soon thereafter. To keep our planet habitable means giving up fossil fuels faster than we have adopted them. Nonetheless, our built infrastructure demands their use. Moreover, status-quo inertia and current policy pathways encouraging and subsidizing fossil fuels militate against reductions, much less the dramatic reductions required. 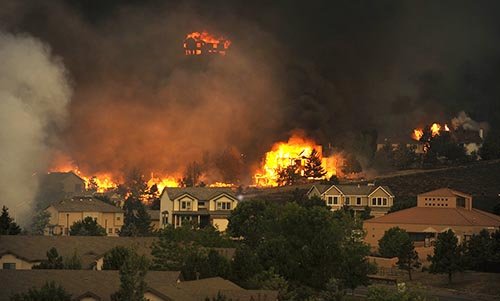 More frequent and more intense wildfires (such as this one in Colorado, USA) are another consequence of a warming planet; © R.J. Sangosti/Denver Post. Courtesy: www.PopulationSpeakOut.org

In the 2015 summer of the United States, there is little conversation or awareness of the changes necessary to get off our fatal fossil-fuel addictions. Most US citizens think that we can continue what we are doing and tweak around the edges of our energy systems, adjusting a bit here and there and keep our current industrial wonder-world whirling.

None of this looks good for getting to a renewable future, or for reaching any livable future without hell and high water for everyone.

That we can create a lovely livable future is within our ability. It would take a worldwide concerted effort, an immediate U-Turn on fossil fuels, emergency cooperation between the nations of the world, and much more. The other option is an ungovernable, uninhabitable planet. It’s our choice. But, the outcome, i.e., a renewable future or a char-fried planet will be determined in the next few years. We have little time to make the necessary changes to have a future for our children. So, let’s discuss what is necessary, along with when and how it can be brought into being.

Pope Francis is making headlines telling the world to take care of creation and the poor, explaining that it is a moral question; while less visibly, scientists are explaining the scope, scale, and urgency of the matter. Three of the most credible summarize the situation well.

First, Kevin Anderson, Tyndall Centre for Climate Change Research, has explained how the industrial world needs to decrease emissions by 10 percent per-year to avoid the worst aspects of climate catastrophe. A good summary is his film “Real Clothes for the Emperor - Facing the Challenges of Climate Change.” Next, Glen Peters, part of the team at the Centre for International Climate and Environmental Research argued that “Globally, emissions would need sustained and unprecedented reductions of around 7% per year for a likely chance to stay within the quota [2°C heat ceiling].” Considering that the developed industrial nations must allow basic dignity in the not-yet developed nations, this means developed nations are committed to about 10 percent per-year reductions. Third, James Hansen, our most famous and prescient climate scientist recently published a bombshell report on sea level rise that demands “emergency cooperation among nations” on fossil fuel reductions. Any way one would look at it, we must do something we have never come close to doing, and do it on a continuous basis: simultaneously reducing fossil fuel use dramatically and continuously, while changing out fossil fuel infrastructure and replacing it with renewable energy infrastructure.

It’s necessary here to discuss how this might actually happen, given the political systems, the economic system, and the status-quo momentum supporting fossil fuels. Add to that the sunk cost reality of fossil fuel infrastructure and subsidies. The International Monetary Fund estimates that world governments are subsidizing fossil fuels to the tune of 5,000 billion dollars per-year! The only seeming positive supporting the necessity of complete transformation is that our very survival depends on it. Moreover, the dire need for that complete transformation is upon us now—not some 10-to-15 years from now. In ten years, without complete change well underway, all will be lost. Everything of humanity’s past, present, and future will go up in smoke and also be inundated by flooding never seen heretofore. 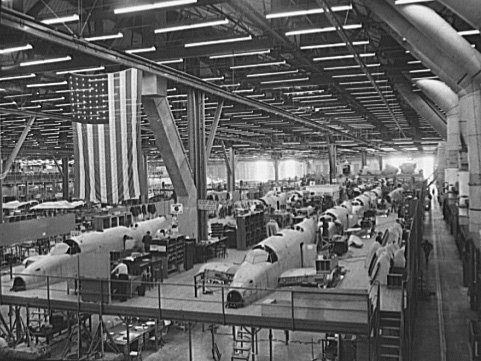 Lockheed Ventura bombers built for the Royal Air Force under construction at the Lockheed Vega division, Burbank, California (USA), in June 1941. The factory originally made explorer aircraft, but was converted for the war effort. To combat climate change, we need a similar-scale mobilization of our culture. Photo: David Bransby, Farm Security Administration, Office of War Information Photograph Collection (Library of Congress).

Since we can achieve climate stability in time to ward off the worst effects of climate disruption if we act now, how can humanity—particularly the United States—be focused into the cooperative “world-war-type” mobilization effort that will be necessary for this next 25 years? Shining the light on that possibility here in the US is a good place to focus, because the world must have the full and continued support of the US, understanding that we’ve co-created and exacerbated the problem and vociferously ignored our role as the crisis’ worst perpetrators.

So, the question is: What would need to happen in order for the US to lead the world into a renewable future?

If that result is necessary, and it is if we hope to spare our descendents hell and high water, then we must consider how it might occur.

There is a way that the US could deliver on its promise as the “beacon of freedom” for the world, and as a “City on a Hill.” This analogy means that the US would be a genuine example of communal charity, affection, and unity to the world, as we once were called to be. And sometimes in our storied past we held ourselves to that standard. Can we again? 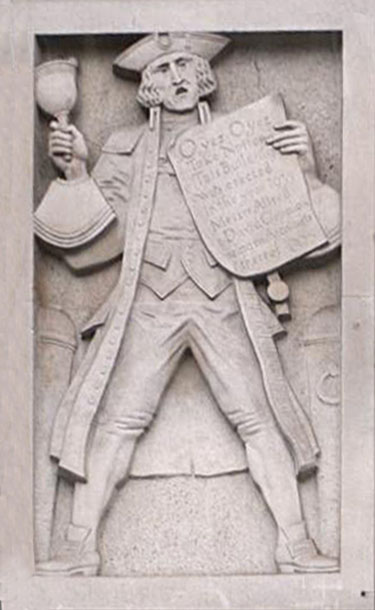 Consider, for example, what would happen if the 137 mega-billionaires, who through The Giving Pledge have promised to give at least half of their fortunes to charity and good causes, would take just 10 percent of their pledges and provide $30 Billion over several years (from an estimated net worth of over $600 billion). In so doing, they could fund a tide-turning effort on the scale of a presidential campaign. First, Philanthropy would capture and saturate every media means and mechanism, spending whatever was necessary to provide the intervention to our somnambulant culture, so that the call to the public could not be ignored. The reality of the crisis would be heard and sung in every community, like by the town criers of old.

Besides the word being delivered to the people so that the truth could be “perceived,” the Big Philanthropists could fund the “believe” and “conceive” parts of the strategy. That could happen by fanning out thousands across the country who would be conveners of the conversation. The idea is that there could be coordination on a cultural conversation across our nation in faith congregations and civic spaces in every zip code.

The conversation would be about the climate-related economic and moral crisis facing all of us. Picking up on the Pope’s prophetic efforts, and on sober reality, discussion leaders could convene an ongoing conversation in secular and religious settings alike—especially in places where we typically consider life’s big questions, such as those of morality and charity. Usually these are the social halls of our religious organizations.

Finally, to “achieve” the needed changes in time, Philanthropy could support the organizing of grassroots to demand fundamental policies, such as a price on carbon and the removal of fossil fuel subsidies. In July on the Daily Show with Jon Stewart, President Obama called for public involvement: “If we don’t hear from citizens, we end up making bad choices. … If people are engaged, eventually the political system responds, despite the money, despite the lobbyists, it still responds.”

If 21st century philanthropy would respond, like the 19th century mega-philanthropy of idealists such as Andrew Carnegie did respond, then perhaps we could have a chance for a different world, a livable future beyond 2050. Perhaps it is up to us to ask, for our own sake, for the sake of our children, and for a future yet to be.

Watch the film, and then take just a moment to help catalyze the giving of philanthropists, to play a bigger climate role than ever.

Michael Mielke is Strategist for the Association for the Tree of Life. He is a long-time climate stabilization activist and a veteran professional for ecology and the environment.