But, Broken and Cooked

“The easiest thing of all is to deceive oneself, for we believe whatever we want to believe. This is so, even though the reality is often different”

Absent the appearance of vast herds of magical “Carbon-Sucking Unicorns” to rescue us, we can be assured that not only is the Earth surface cooked medium-to-unwell done, but also we will harvest a broken climate. We will say goodbye to many parts of civilization these next few decades, perhaps in its entirety.

The question then is, "Will we work hard to achieve Purgatory?" Or, "Will we slide into Hell itself and end the human experiment?" 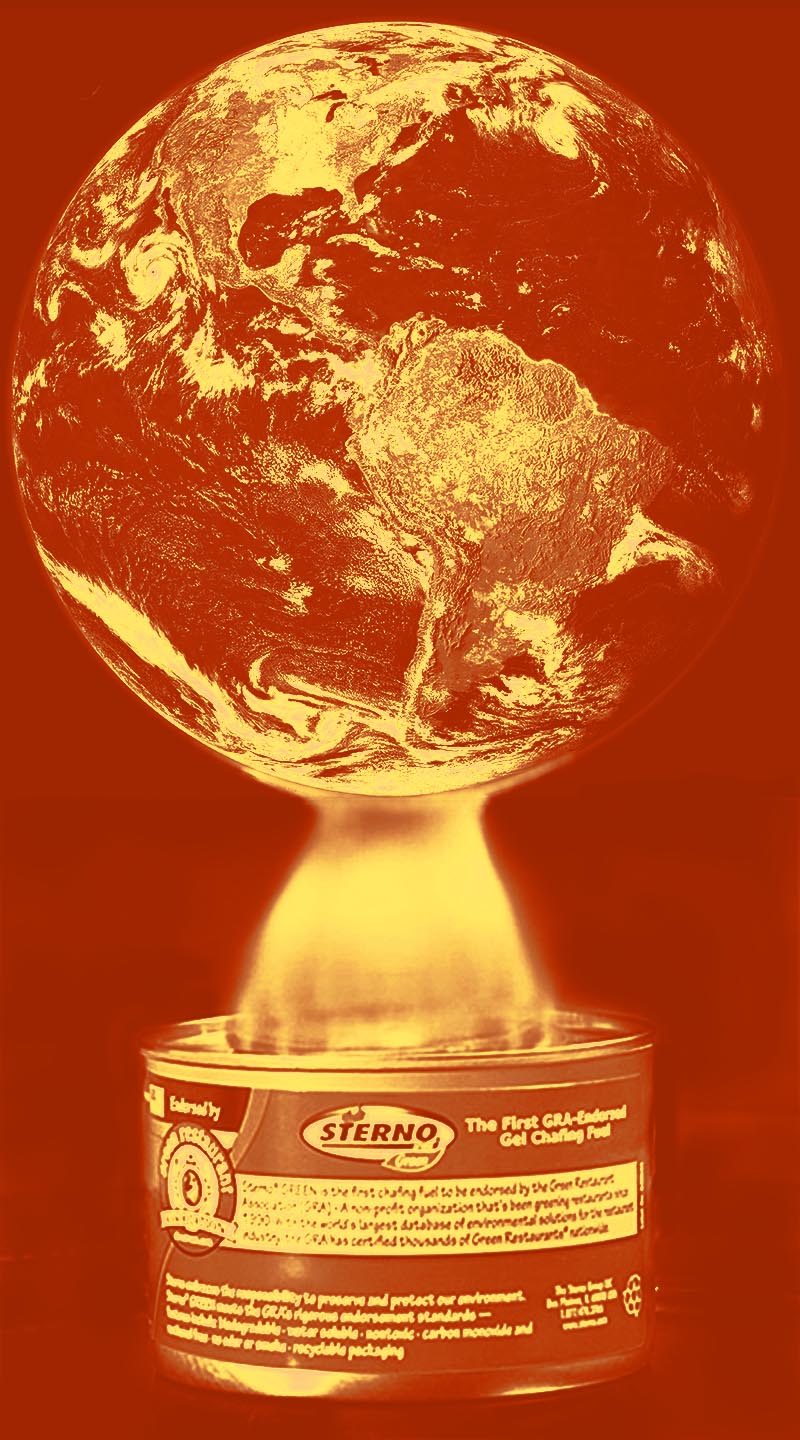 The latest meeting of the International Troupe continued their climate discussions about attempting stabilization, but rhetoric substituted for substantive results. The 24th Conference of the Parties met in Poland, and the purpose was to decide how to reduce fossil fuel emissions that will soon break the climate system, as it is already broken at the poles of our beautiful world. None of the meetings have accomplished any reductions since the first Conference in 1990, and climate destabilizing pollution is up some 67% since that first meeting.

This year Global Cooking carbon emissions increased about 3%, to about 33.5 billion metric tons.  This number needs perspective. In the USA, each individual puts into the air about 18 tons of this cooking material each year, and has for quite some time. Here is a visual of the volume of one ton of this sterno cooking fuel.

Now to get a “feel” for the red-hot cooking going on. The amount of cooking fuel added to our world each-and-every-day by our collective cooking fuel additives is about 345,600 individual Hiroshima-style nuclear bombs. So, when an individual says they do not believe in global warming, they are so 20th Century! We don’t have global warming, nor do we have climate change. We are now cooking our Earth home, so Global Cooking is the correct new term. Similarly, global warming is no longer pertinent. We are fast breaking what was for the last 10,000 years a livable climate system. Climate Breakdown is underway and fast approaching an area near to each homestead. Expect singeing soon, and prepare for fire brigades in some near future.

If someone does not grasp that the cooking fuel we are continually adding to the air matters gigantically, then they are part of the comprehensive denial mechanism employed to continue keeping-on-keeping-on, doing the consumption-destruction dance while telling others, like the poorer ones, what they should do to reduce. “We have met the enemy and they are me! But, I can’t look in the mirror, and I won’t!”

It takes great writers to explain our comprehensive self-deception. David Wallace-Wells explains how “You, Too, Are in Denial of Climate Change.” He explains the 50 ways to say you believe in the “cooking,” but how to avoid doing anything meaningful about it. Another article explains that stabilizing climate is just getting too big to handle, thus we all are accepting climate breakdown.  Now, the next ten pages could be filled with corroboration for breaking the climate system and all of the attendant “Overshoots” germinating in the current ideal conditions.  But that is not the major point of this short message.

The takeaway is how, even with the climate in the process of breakdown, there is everywhere the distraction and delusion of “miracles, magic, and carbon unicorns” gratuitously added to the climate crisis. It’s as if we “want” to break the climate faster and more completely! Most everyone, including the so-called climate movement is part of the ruse. The good guys don’t even know that they are being duped!

So, as bad as it is with us missing scale, scope, and urgency while we fiddle—the truth is that it is much worse than that. This is because carbon sucking unicorns are proposed (in almost all IPCC climate models being used or considered) to magically and miraculously appear so that we can keep fooling ourselves about the time available to respond so that we can avoid the Hell toward which we are heading. Unfortunately, ignorantia legis neminem excusat.  Thus, if we keep ignoring Reality’s laws, we will end up in Hell, even if the best of us are filled with great intentions!

Now, we don’t have a snowball’s chance in Hell of avoiding Purgatory for a few centuries, if some of us are to survive the reckoning coming, but we might avoid permanent Hell if we shed our delusions. Permanent Hell means all of humanity is terminated. Purgatory is the good news.

There are two ways to describe our options, Purgatory or Hell. One is the Delusions and Contradictions way, pages 11-18, explaining the Tinkerbell-Effect which presumes the appearance of hordes of Carbon Sucking Unicorns. The other way is to understand the ways of our “Deluder-in-Chief.” And the Deluder-in-Chief manifests an interesting example of our collective delusions embodied in one famous person. One you might not consider a victim of the Tinkerbell-Effect. But, he is a classic victim.

Understand the Tinkerbell-Effect this way:

Nine years ago, Bill Gates made his most famous appearance at TED, and espoused his belief that coming soon were energy miracles, abundant zero-carbon energy supplies, and (of course) solutions to the climate breakdown crisis.  This was nine winters ago. View the video, and read the transcript, this TED talk is fascinating in what it reveals. Today, we are no closer to those energy miracles than we were then, and Gates still believes in energy miracles!

In another nine years, Gates will have abandoned his delusion, because it will be too late to do the entire process of implementing a new energy system. We do not have the time to design, develop, demonstrate, scale and make economically viable and cheap enough, a new energy system when it is still a notion of techno-delusionists. Nor will we manage to produce magical Carbon-Sucking Unicorns.  These are wishes and dreams, unfortunately not at all related to Reality, i.e., non-Reality based assumptions.  And we get lots of those from our President Trump every day. In common parlance it is called lies. Or belief in Tinkerbell, if you prefer.

So, this essay suggests that our preferred outcome, given the options of Hell or Purgatory, is Purgatory.  Devoutly to be wished. And if you do not “believe” these are our options, just you wait. You will see soon enough. Omitted here are explanations of the entire spectrum of “Overshoots” we have spawned, giving us the option between a series of looming disasters, or comprehensive catastrophe. The option you have, if you want any future for your “Posterity,” as they have been promised, is to help all of us to work hard  for the Purgatory that is necessary if we are to have any Posterity at all. Or, continue believing, along with Gates and friends, in miracles and that you can bring back Tinkerbell just with a clap of your hands.