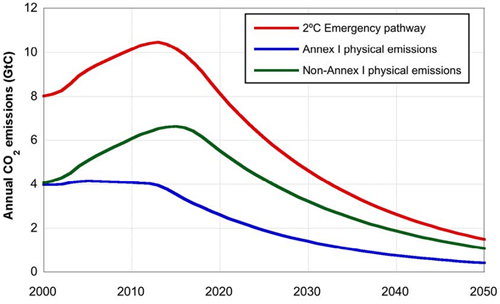 Humanity may not survive unless we stabilize climate at no more than a 2ºC /3.6°F increase from pre-industrial times. The 2°C limit is endorsed by nearly all nations as the maximum that can be tolerated or managed. Yet the necessary emissions reductions to stay within the limit would be heroic and would require a sharp break from business as usual.

The 2ºC Emergency Pathway (the red line in the graph) defines the limit of allowable total gigatons (billion tons) of CO2 emissions—a highly constrained emissions budget with swift reductions. The Annex I Countries[1] comprise most wealthy industrialized nations, and the Non-Annex I Countries[2] comprise the poor developing nations.

To stay within the Pathway, carbon emissions must decline sharply even in the developing world, including rapidly industrializing nations like China and India (both categorized as Non-Annex). Global emissions must peak by 2014 and decline to 80 percent below 1990 levels by 2050.

Complete cooperation is necessary from the industrialized nations. They must reduce emissions to near zero by 2050, starting in about 2014 with an annual 6 percent reduction—more aggressive than anything yet proposed. But even if developing nations can achieve this, the CO2 budget remaining for the developing world is very constricted. Their emissions must peak a few years later, by 2020, then also decline nearly 6 percent annually through 2050.

Until recently, the developing world's only option for progress has been by increased use of carbon energy. To avoid climate mayhem, the wealthier nations must drastically reduce their own emissions while providing massive assistance with low-carbon development to lift the developing world from poverty. Yet the world has been in political deadlock over this issue for years.

We will only make progress with an objective climate regimen that facilitates dramatic emissions reduction, even while allowing the developing world to expand energy use to relieve poverty. The think tank EcoEquity[3] has created a framework, the Greenhouse Development Rights (GDR)[4] that addresses this issue.

The GDR defines a level of welfare below which people are not expected to share the costs of climate transition, as a "development threshold”: higher than the "global poverty line” (meeting basic needs), but well short of affluence. People living below this threshold can have development as their primary priority. As incomes rise, they assume more of the costs to curb their own emissions, while assisting those still below the line.

"Capacity" is income that exceeds the development threshold, available to be “taxed” for investment in climate mitigation. "Responsibility" is contribution to the climate problem—cumulative emissions since 1990, above the development threshold. When combined into a single index of obligation, a “Responsibility Capacity Index” (RCI), they take into account unequal distribution of income and impact within nations. The Index will account for nations with a wealthy, high emissions minority and a poor, low emissions majority (such as China and India). National per-capita averages fail to capture this disparity. The US would bear the largest share of global RCI (2010), at 33.1%.

The GDR provides an objective method to fairly differentiate national obligations (between wealthy and developing nations), in bearing the burdens of climate protection, while ensuring a meaningful right of development. This is a real breakthrough for international climate negotiations. It just simply assigns to each nation their obligation at an appropriate scale, according to their RCI. Additionally, the wealthy minority in Non-Annex I Countries must pay their fair share.

How to operationalize and fund this? The RCI could determine each nation’s contribution to a single global fund. The RCI would serve as the basis of a progressive global climate tax—a "responsibility and capacity tax" (separate from a carbon tax). Alternatively, the GDR framework and RCI could be used to define each nation's reduction obligations as a share of its global mitigation requirement.

It is easier to agree to principles than to implement them, especially in requiring powerful nations to accept large obligations and to commit to providing large international assistance over time. Yet without unprecedented global cooperation, the 2°C Emergency Pathway and climate stabilization will quickly become unattainable. Assuring universal social and climate justice is no longer a moral or noble thing to do. It is instead a survival necessity for all of us.