To stay within the 2°C heat ceiling, we must understand how much fossil fuel we have left to burn worldwide, and how quickly we must end our carbon addiction to avoid the completely catastrophic climate effects. An analysis of carbon fuels budget remaining follows, using prospective carbon pathways that stay within the heat ceiling.

That analysis of what carbon fuels we have left to burn is based on what realistic or unrealistic additions are made to the overall budget. For instance, the budget increases if negative emissions are included, that is, technologies demonstrated neither economically or technically at scale. Examples include afforestation, biochar, BECCS (biomass energy with carbon capture and sequestration), CCS with coal, free capture of CO2, and others. Many, if not most CO2 mitigation pathways and models include assumptions with these technologies. However, we believe these should change or increase the available fossil fuel budgets if and only if they are demonstrated.

Additionally, if a fossil fuel reduction pathway makes the non-CO2 emissions floor at or near zero, we again argue this is not plausible until and unless we are able globally to zero out the potentially irreducible requirements of agriculture. While the appropriate “floor” for agricultural emissions are not exactly quantified, the current estimate for agricultural CH4 (methane) and NO2 (nitrogen dioxide) are currently estimated at 5-to-6 GtCO2 annually. A prudent and realistic pathway excludes unproven methods and technologies and provides a carbon fuels budget that gives the world a 2-in-3 (66%) to a 4-in-5 (80%) probability of staying within the 2°C heat ceiling.

Two CO2 mitigation pathways that include the criteria mentioned above are worth review and consideration. First, EcoEquity’s Three salient global mitigation pathways, assessed in light of the IPCC carbon budgets.[1]  Second, Carbon Tracker’s Unburnable Carbon.[2]  The analysis that follows uses the data in the EcoEquity Strong 2°C pathway, including reasonable estimates for 2013 and 2014 emissions. Including the estimates for last year and this year, the approximate budget remaining for 2015 through 2050 is 603 GtCo2. A CO2 pathway reduction with regression analysis quantified in the graph below shows that the reductions needed for each year are about 5.34% annually with next year, 2015 as the peak year in fossil fuel emissions. 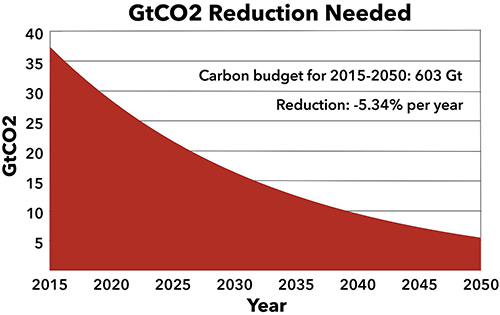 CO2 emissions reductions of 5% per year on average are now needed for the likelihood of staying below the 2°C heat ceiling.

To stay within the 2°C heat ceiling requires that: (1) reductions begin in very short order, and (2) fossil fuels are phased out by mid-century. Even altering the budget 10 percent does not substantially change the timing or the percentage of reductions needed.